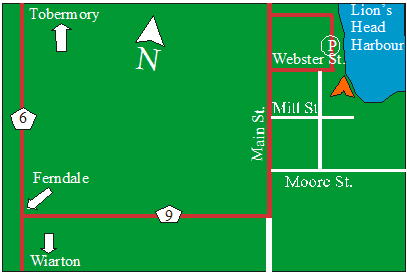 Heading north from Wiarton for 30 kilometers on Highway #6, turn right at Ferndale. Drive for two kilometers to a T-intersection, then turn left onto Main Street in Lion’s Head. Drive for one kilometer to the Royal Bank where you will turn right onto Webster Street and drive directly to the beach. Parking is available in this area.

Coming from Tobermory head south on Highway #6 for 44 kilometers. Turn left at Ferndale then drive for two kilometers to a T-intersection. Turn left onto Main Street in Lion’s Head. Drive for one kilometer to the Royal Bank where you will turn right onto Webster Street and drive directly to the beach. Parking is available in this area.

Leaving Lion’s Head Beach Park on Joseph Street you walk up to the Hospital. Here, turn left onto Moore Street and follow this road as it turns to gravel then to dirt. From there, the trail turns southwest into the bush and soon passes several side trails that lead to pothole formations in the escarpment’s surface. The trail then curves northwest taking you towards Georgian Bay, where the trail soon appears at the top of the cliff face. This lookout point allows you to see north towards Cape Chin as well as the white bluffs of Isthmus Bay. The trail then descends quickly and emerges beneath an impressive overhanging ledge with large boulders all around. Continuing at the base of the escarpment you’ll walk through dense forest before emerging in an area filled with stunted growth cedars then out onto a cobblestone beach. Continue down the beach and you will come to a wilderness camping area at McKay’s Harbor approximately 7 kilometers away. These backcountry sites do not permit group camping or fires, so be sure to have a personal stove and pack out all your garbage.

Leaving McKay’s Harbor via an old logging road on the south side of the beach, the trail turns sharply left and ascends back up the escarpment. The trail follows the edge of the escarpment offering many lookouts as it heads into Barrow Bay. The trail winds down the top of the escarpment before bringing you out on McCague Road. Follow this road to Bruce County Road 9 and turn left. The trail continues on County Road 9 for 4.3 kilometers before turning onto Scenic Caves Road. The trail follows Scenic Caves Road for 2 kilometers before turning right into Rush Cove parking lot, be sure to check out the amazing Caves. The trail continues into the bush on an unopened road allowance taking you over a limestone ridge before crossing a gravel road. The trail continues back towards Georgian Bay emerging high on top of the cliff’s edge. The trail then turns southwest along the top of the escarpment allowing for views of Cape Croker and White Cloud Island. The trail follows many increases and decreases in altitude along the escarpment’s edge before slowly descending into the little village of Hope Bay. Watch for glacial potholes to your right in this section! Next, the trail turns right onto Water Street, following it for 500 meters before turning right and emerging near a general store.

Hope Bay is located 32.4 kilometers southeast of Lion’s Head on the Bruce Trail. It is a small town that hosts many cottages, a general store, and the Cedarholm private campground. There are pit toilets and garbage facilities available at this parking location.

When leaving Lion’s Head Harbor, be sure to stay to the right side of the harbor to avoid the boat traffic. The farther along the shoreline you go, you will notice the escarpment start to rise again as the cottages and houses start to diminish. The crystal clear waters of Georgian Bay become more apparent as you kayak along the sheer rock walls on your right and the white bluffs to your left. As you approach the Lion’s Head Point you will see what was once the natural Lion’s Head image carved into the top of the escarpment. All that remains there now is a jagged limestone cliff. As you round Lion’s Head Point, the shoreline levels out from a jagged rock face to a cobblestone beach. Continuing along the shoreline the water becomes quite shallow, allowing you to view the rock beneath you. Next, the shore moves inland to create what is called McKay’s Harbor.

McKay’s Harbor is located about five kilometers from Lion’s Head. An excellent spot to stop for a break or camp for the evening, there are many wilderness campsites available. A privy is located in the bush, but group camping and fires are not permitted. There are no garbage facilities at this site.

After leaving McKay’s Harbor, the cobblestone beach continues for a distance as you round Gun Point into Barrow Bay. Here, the shoreline slowly becomes jagged again. The high escarpment lining the perimeter of Barrow Bay offers ample protection from northerly winds, but one must remain cautious if there is a heavy east wind. As you approach the bottom of the bay the shoreline becomes flat with limestone shelves. At this point cottages start to appear. For an interesting side trip, locate the navigation light near a channel. After a short paddle through here, you will emerge into Little Lake, a popular cottager’s destination, but a pleasant experience all the same.

Leaving Barrow Bay heading towards Cape Dundas, (the closest point you can see, located approximately seven kilometers away), you approach even more great scenery of the Georgian Bay escarpment. Rounding the point, you will get your first glimpse of Cape Croker and the islands behind it. As you approach Hope Bay, you’ll pass by Jackson’s Cove and Bull’s Landing. The Landing is an outcrop of land that protrudes from the escarpment’s edge with a shoal running westward for approximately 100 meters. By paddling around the shoal into Shoal Cove you will find yourself in Hope Bay. There is camping available at Cedarholm Campground, located at the bottom of the bay.

Hope Bay is located 25 kilometers from Lion’s Head Harbor and is host to Cedarholm Campground and a general store. Parking and washroom facilities are available here. One could camp here or continue for nine kilometers to Cape Croker Park at Sydney Bay.