Getting to Cape Croker 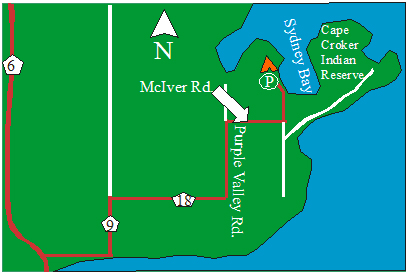 From the Cape Croker Indian Park to Wiarton it is 36 kilometers. Be sure that you have lots of water! Head south on Crooked Toe Road before turning right on McIver Road, which you will follow before heading southeast into the bush. The trail then follows the escarpment around Jones Bluffs providing views of Hay Island, Griffith Island, and White Cloud Island which shelter Colpoy’s Bay and Big Bay. Continuing down the south side of Jones Bluffs, the trail takes you through an open forest area before emerging onto a road. Follow the road to the Cape Croker Access Road and turn left.

From the road allowance you will hike up the escarpment to emerge on an ancient beach ridge. Continue to follow the ridge and enter the nearby hardwood bush. Climb the ladder before turning left and following the edge of the escarpment for 100 meters. The trail will take you through a pasture, crossing over a stile and taking you eastward across an alvar, a rare type of ecosystem where grass species grow on nearly bare rock. You will hike southeast through a pleasant forest and up a rocky ridge back to the top of the escarpment. After walking parallel to the cliff’s edge, you will turn inland and gradually descend onto an old bush road.

Continuing down the old logging road, the trail slowly winds its way across two stiles and down a hill before turning right. You will encounter County Road 9 again and follow it until you reach an old barn foundation. After crossing through a cattle pasture, over another stile, and then through semi-open brush you will pass over a private laneway. Continuing through more agricultural land, you’ll cross over another stile that brings you back to the shoreline near Spirit Rock. At this point you will pass by the ruins of the Corran. This was once a 17 room mansion that was built just north of Wiarton in 1882 by Alexander McNeill. The property, which included many rose gardens, an ice house, and agricultural lands, overlooked Colpoy’s Bay until new vegetative growth overtook the front yard. These historical remains are now owned by the Grey Sauble Conservation Authority.

After descending the winding iron staircase from the cliff top to the shoreline, you can hike along the waterfront into Wiarton. Camping is available at Bluewater Park in this small town.

Sydney Bay to Wiarton totals 46 kilometers of continuous paddling, and is not recommended for beginner to intermediate paddlers. The land surrounding Cape Croker is a First Nations Reserve and much of the shoreline from Cape Croker to Wiarton is privately owned. As a result, rest areas are limited.

Leaving Sydney Bay, follow the shoreline south past Prairie Point and into MacGregor Harbor. There are many bays and inlets on this section of shoreline which are all very interesting to explore. After continuing northwest for awhile, the shoreline gradually turns at Partridge Point and starts heading due north. Follow the shoreline past the spectacular Geeshkaupikauhnssing Cliffs and around Benjamin’s Point before turning into North Bay. Here you will see many houses dotting the shoreline. Continue around the bay to Cape Croker Point where the Cape Croker Lighthouse can be viewed – this is an excellent place to stop to view scenery and have a snack.

The current Cape Croker Lighthouse was built in 1902 and was constructed out of reinforced concrete. It was the first of its kind to be built in the area. It was also the first to have an electrically operating light and foghorn. It is 53 feet high and can be seen as far away as 30 kilometers out in Georgian Bay. There are no guided tours or bathroom facilities here, but it does make for an excellent photo or sketching opportunity. The view of Hay Island, Griffith Island and White Cloud Island at the mouth of Colpoy’s Bay is also quite nice.

As you paddle down the shoreline, the waters become fairly protected by nearby Hay Island. You will soon pass Gravelly Bay and Gravelly Point down a long flat section of beach (Mallory Beach) into Colpoy’s Bay. Shortly after passing by this village, be sure to stop at the Spirit Rock Conservation area and visit the remains of the Corran.

After leaving Spirit Rock Conservation Area, it is just a short paddle to the campsites at Bluewater Park in Wiarton. The park is located just south of the marina where you can pull your boats up on shore and get your pass from the park office, located at the old train station. It is best to book in advance. There are many stores and restaurants only a five minute walk away!